Minerals are a special type of nutrient that our bodies require in order to function optimally. Mineral deficiencies occur when our bodies aren’t able to obtain, and/ or absorb the required amounts of said mineral(s).

If left untreated, mineral deficiencies can bring about a multitude of potentially detrimental health complications. If we are able to understand and recognise the telltale signs of a particular mineral deficiency, we can then curb the negative consequence through appropriate treatment.

Let’s begin by looking into zinc

Zinc is an essential mineral required for many important chemical reactions occurring in the body. Zinc is what’s known as a ‘trace element’, which as the name suggests is only present in small amounts within the body.

Trace elements unlike other essential minerals are only required in small amounts but are not produced in any capacity by the body, and for this reason need to be obtained externally, from either food or supplements.

What is zinc deficiency

As we have previously mentioned, zinc is a trace element, meaning it is distributed in trace amounts within cells of the body. This makes it difficult to detect zinc deficiency through a simple blood test, the usual method used to detect most deficiency states.

In light of limitations in testing, blood plasma testing is the method of choice, however, it is not very sensitive to having a slight deficiency, as a change in plasma zinc is not detectible until zinc levels are very low. For this reason, a patient may have a perceived “normal” result according to the blood plasma test, whilst still being deficient in zinc. Medical professionals may also use urine and hair analysis as alternative diagnostic tools.

Zinc deficiency shares symptoms with other deficiency states and medical conditions, and to be sure of the culprit your doctor should carry out other tests.

Some examples of other tests include:

Diagnosis of zinc deficiency is typically made based on clinical suspicion and a low level of zinc in the blood (plasma). The usual diagnostic value is below 70 mcg/dl, where the normal range is 70 – 120 mcg/dl.

As mentioned previously, zinc is not produced by the body and is instead gained externally from our diet and through supplementation. For this reason, the most common cause of zinc deficiency is a lack of dietary intake, whether that be intentionally or consequent due to restrictions caused by a medical condition. The content of zinc is prominent in foodstuffs such as meat and seafood and forms the basis why vegans & vegetarians may be at ab increased risk of deficiency. There are however other sources of zinc that can accommodate such dietary restrictions, with examples being; dairy products, eggs, fortified breakfast cereals, legumes, nuts, whole grains, amongst others.

An impaired ability to absorb zinc from the small intestine of the digestive tract is another common cause of zinc deficiency.

Conditions that impair absorption include gastrointestinal disorders such as ulcerative colitis, Crohn’s disease, and coeliac disease. Long term illnesses relating to the liver and kidneys may also affect absorption and must be assessed in suspected cases of zinc deficiency.

Excess alcohol intake may also be a contributory factor, as alcohol not only inhibits the absorption and/or utilisation of zinc but also increases zinc excretion via the urine.

The above are just a couple of common examples of what may be causing zinc deficiency, however, there are other potential causes which your doctor will highlight during the assessment process.

Signs and symptoms of zinc deficiency - an infographic 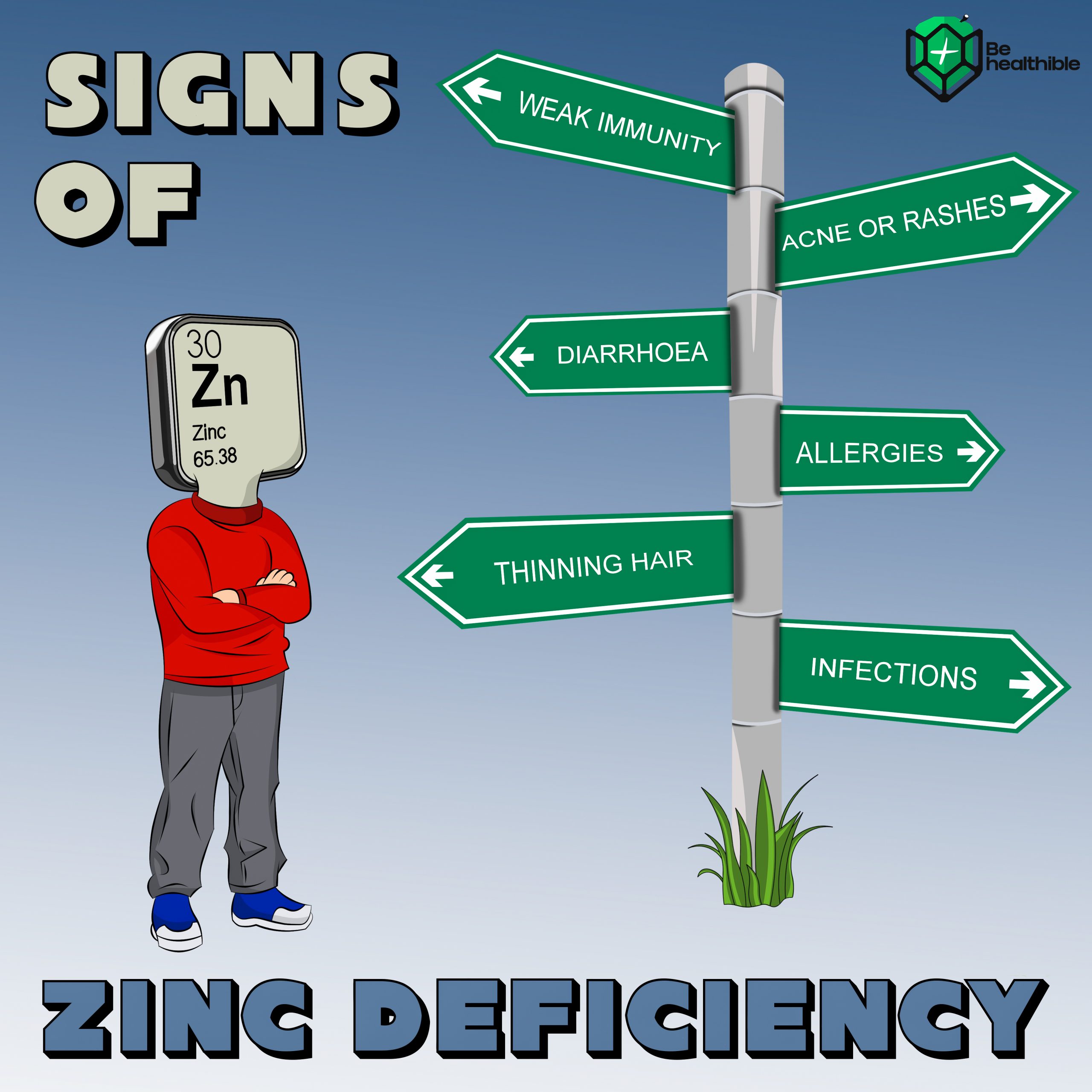 Signs and symptoms of zinc deficiency

Allergies – Histamine is an organic compound that has many important roles within the body, one of which being its role in causing common allergy symptoms such as swelling, itching, and sneezing. Believe it or not, these allergy symptoms are designed to help our bodies in fighting off pathogens (bacteria, virus, or other unwelcome microorganisms), and so forms an integral part of the immune response.

Studies have shown that zinc plays a role in suppressing the release of histamine from our bodies, helping to regulate our immune response. So, a deficiency in zinc would have the opposing effect, whereby the body releases more histamine than usual. Too much of a good thing is not always beneficial, and high levels of histamine can make you more susceptible to allergy symptoms, in circumstances that would otherwise not warrant them.

Diarrhoea – Zinc deficiency is associated with an increased risk of gastrointestinal infections, as well as an adverse effect on the structure and function of the gastrointestinal tract. This effect is two-fold, as diarrhoea can result in malabsorption of nutrients, including zinc, which will only act to further exacerbate zinc deficiency, a vicious cycle.

Hair loss – Zinc plays an important role in the growth and repair of hair, whilst also helping to keep the oil glands around the hair follicles working properly. One theory in relation to the hair follicle states that zinc deficiency leads to a change in the protein structure of hair follicles, leading to structurally weaker hair. As a result, new hairs will fall out earlier than they should.

Loss of appetite – It is believed that Zinc negatively affects Ghrelin & leptin. These are ‘hunger hormones’ which stimulate appetite and cause us to seek out food. A reduction in the level of these hormones will consequently reduce appetite.

Sight problems – Zinc is present in high concentrations within the eyes, mostly found in the vascular layer of tissue (choroid) found below the retina of the eye. Zinc plays an important role in bringing vitamin A from the liver towards the retina, a vitamin required in the production of the protective pigment ‘melanin’ in the eyes.

Studies have also demonstrated that zinc may play a role in preventing age-related macular degeneration (AMD). The ‘macula’ forms part of the retina and is responsible for central vision. Central vision is one of the most important parts of a person’s vision and is necessary for reading, driving, and recognising faces.

Skin problems – Zinc has a role in helping to maintain the health of the largest organ of our body, the skin. This is due to its anti-inflammatory properties, which are beneficial in helping to prevent inflammatory acne and eczema, amongst other skin conditions. A lack of zinc in the body has also been shown to impair, and in some cases even prevent wound healing.

Weakened immunity – Zinc is crucial for the normal development and function of cells involved in the immune system, namely white blood cells. These cells have the basic function of protecting us against illness and disease, achieved by fighting off viruses, bacteria, and other micro-organisms that threaten to disrupt our health.

Weight loss – As previously mentioned, zinc has the potential to cause a reduced appetite, and in long-standing and untreated zinc deficiency is the primary weight loss.

Treatment may vary depending upon how severe the deficiency state is, and in very rare cases may necessitate hospitalisation. Zinc supplements are readily available, however, if you do decide to take supplementation ensure that you follow medical advice. This is because having too much zinc in your system can be problematic in itself. In simple terms, ensure you get the necessary medical advice to know how much zinc you require in order to strike a balance.

As a general rule, do not consume more than 25 mg of zinc supplements per day unless advised to do so by a doctor or medical practitioner.

Despite all the talk about supplementation, the average person should be able to get all of their zinc requirements through a varied and balanced diet. Read the section ‘causes of zinc deficiency’ for more information on foods high in zinc.

How much Zinc do I need per day?

The amount will vary depending upon gender, age, and individual circumstances, however in general the amount of zinc you need is roughly :

You should be able to achieve these numbers as part of your daily diet.

As we’ve demonstrated, zinc is a vital mineral that our bodies require for maintaining optimal function of various processes throughout the body, and we hope that by understanding the aforementioned complications of zinc deficiency that you pay heed to the importance of banking your zinc before it’s too late.

This way, all things considered, you’ll never be the #WEAKESTZINC.