A short tale on alcohol abuse

Harmful drinking habits have claimed both the physical and psychological wellbeing of millions the world over, many of whom have been coaxed by its empty promises, like a drink from a poisoned chalice.

Alcohol abuse is a term commonly thrown around, and unfortunately, those suffering have become the rejects of society. Everyone has their story, and we can’t allow alcohol to colour the pages.

Moreover, alcohol abuse encompasses unhealthy drinking habits, ranging from binge drinking on a night out, to relying on alcohol for every waking moment.

Knowledge is power, and by understanding the intricacies of alcohol and its consumption, together we can devise a plan to once and for all evaporate alcohol in its tracks.

How is alcohol made

Alcoholic drinks contain the chemical molecule ‘ethanol’, one of the most basic forms of alcohol. You may have noticed that ethanol ends in ‘ol’, a suffix is taken from the very word alcohol. Ethanol is the by-product of the fermentation process of alcohol manufacture. Fermentation in its simplest explanation, a reaction between yeast and sugar in the absence of any oxygen, which explains why alcohol metaphorically saps the lives of many.

Alcohol has been around for millennia, and with a process as simple as fermentation you may be asking yourself how we have so many varieties of alcohol available on the market. This comes down to the source of ‘sugar’ used in the fermentation process, which are typically fruits but may also be vegetables and grain products.

For example, it is well known that wine is made by fermenting the sugar in grapes, but did you know that some types of vodka are made using sugar from potatoes? If the answers no, we understand, sounds weird to drink potato juice.

Alcohols effect on the body

Alcohol exerts its effect on the central nervous system (CNS), acting as a depressant. But how exactly does it achieve this effect?

Alcohol works by primarily increasing the action of the chemical messenger ‘GABA’ (gamma-Aminobutyric acid) in the brain. A process, which in simple terms suppresses the activity of neurones in the brain once GABA binds to them. This in turn inhibits electrical signals sent throughout the brain, and as a result, then inducing its cardinal calming effect of alcohol throughout the entire body.

This definition isn’t however all-encompassing, as at lower doses alcohol has the potential to act as a stimulant, triggering symptoms of euphoria. These symptoms are usually reported during the early stages of alcohol consumption, i.e. the first 10 to 15 minutes, making some more talkative, just when you thought they couldn’t talk your ear off anymore.

This stimulant effect occurs due to alcohol’s influence on other chemical messengers within the brain, namely dopamine and natural occurring opioids, which are sometimes also referred to as ‘happy chemicals’.

Drinking too much on the other hand causes the “conventional” depressive symptoms we typically associate with alcohol consumption, including drowsiness, slowed movement, slowed breathing, passing out, and in more severe instances coma and possibly even death.

The need to know about alcohol units

Units are a simple way of expressing the quantity of pure alcohol in a drink. The following section is a guide to all things alcohol units, which will hopefully better equip you to stay within the recommended drinking guidelines.

What is in 1 unit of alcohol

One unit of alcohol is equivalent to 10ml or 8g of pure alcohol, but this is hard to gauge considering alcoholic drinks come in different strengths and sizes. For example, you may have two pints of lager, but because one has a higher percentage of alcohol than the other, it would be 3 units, whereas the lower strength lager would only equate to 2 units owed to its lower percentage of alcohol.

A drink’s alcohol (ethanol) content is usually expressed as ‘alcohol by volume’ (ABV). ABV is a standard measure of the amount of ethanol contained within a given volume of said alcoholic drink, expressed as a percentage, meaning it is the number of milliliters (ml) of pure ethanol present in 100ml of the alcoholic beverage.

To calculate the total number of units in your alcoholic beverage, you simply multiply the total volume of your drink (in ml) by its ABV (alcohol by volume) and then divide this figure by 1000 (see below for an example of this equation). 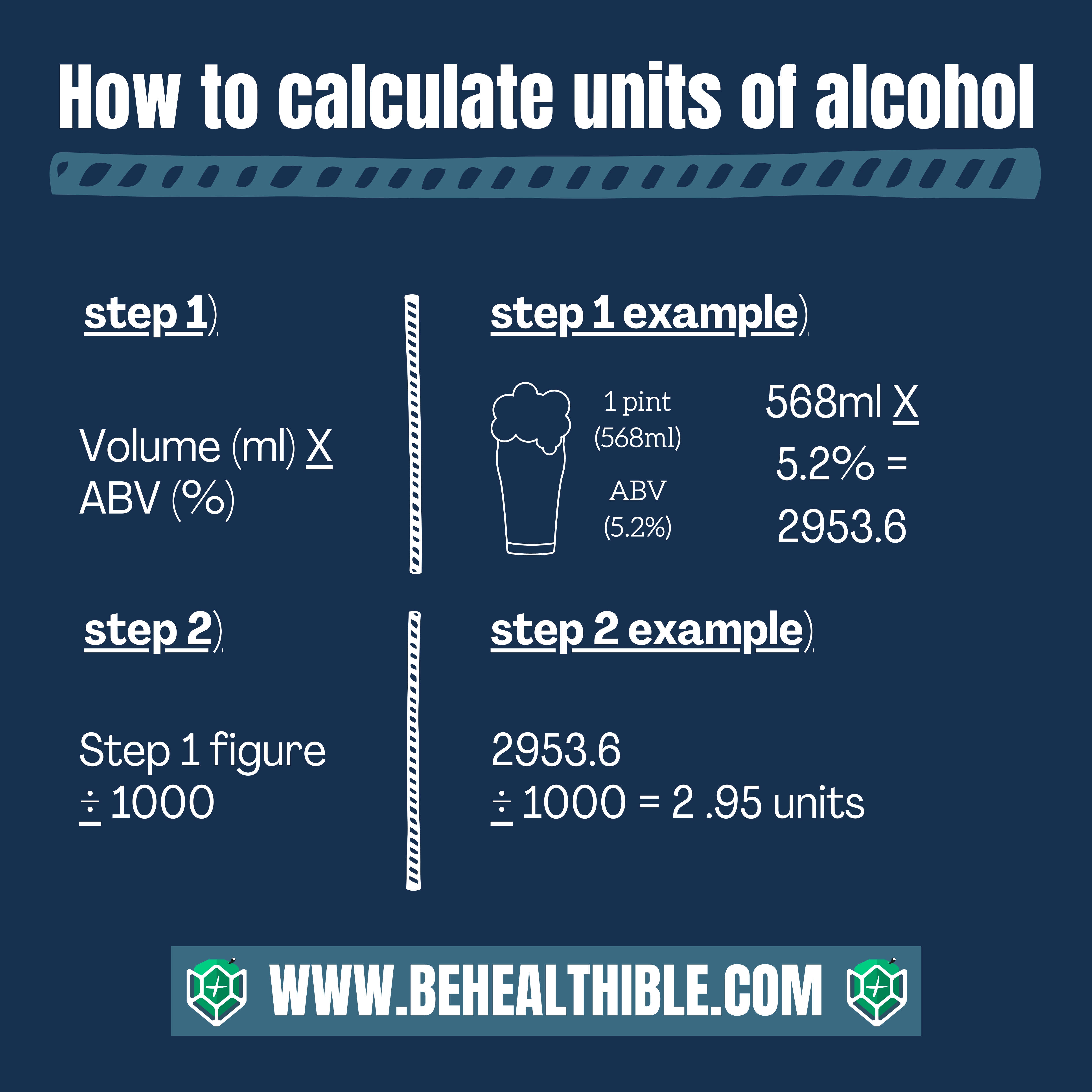 Typically, the average adult is able to process and remove 1 unit of alcohol within roughly 1 hour. However this isn’t a hard and fast rule, as the breakdown (metabolism) time may vary from person to person, based on factors such as gender, genetics, weight, effects of prescription medication, amongst a number of other factors.

What is the maximum amount of alcohol one can consume

For ease of memory and for the ease of keeping a tally, the maximum recommended alcohol consumption is based on a weekly timeframe.

To keep the health risks associated with alcohol consumption to a minimum, both men and women are advised to consume no more than 14 units of alcohol per week. These units should ideally be split over at least 3 days, but the more days you split these over the better.

How many units of alcohol are in my drink - An infographic 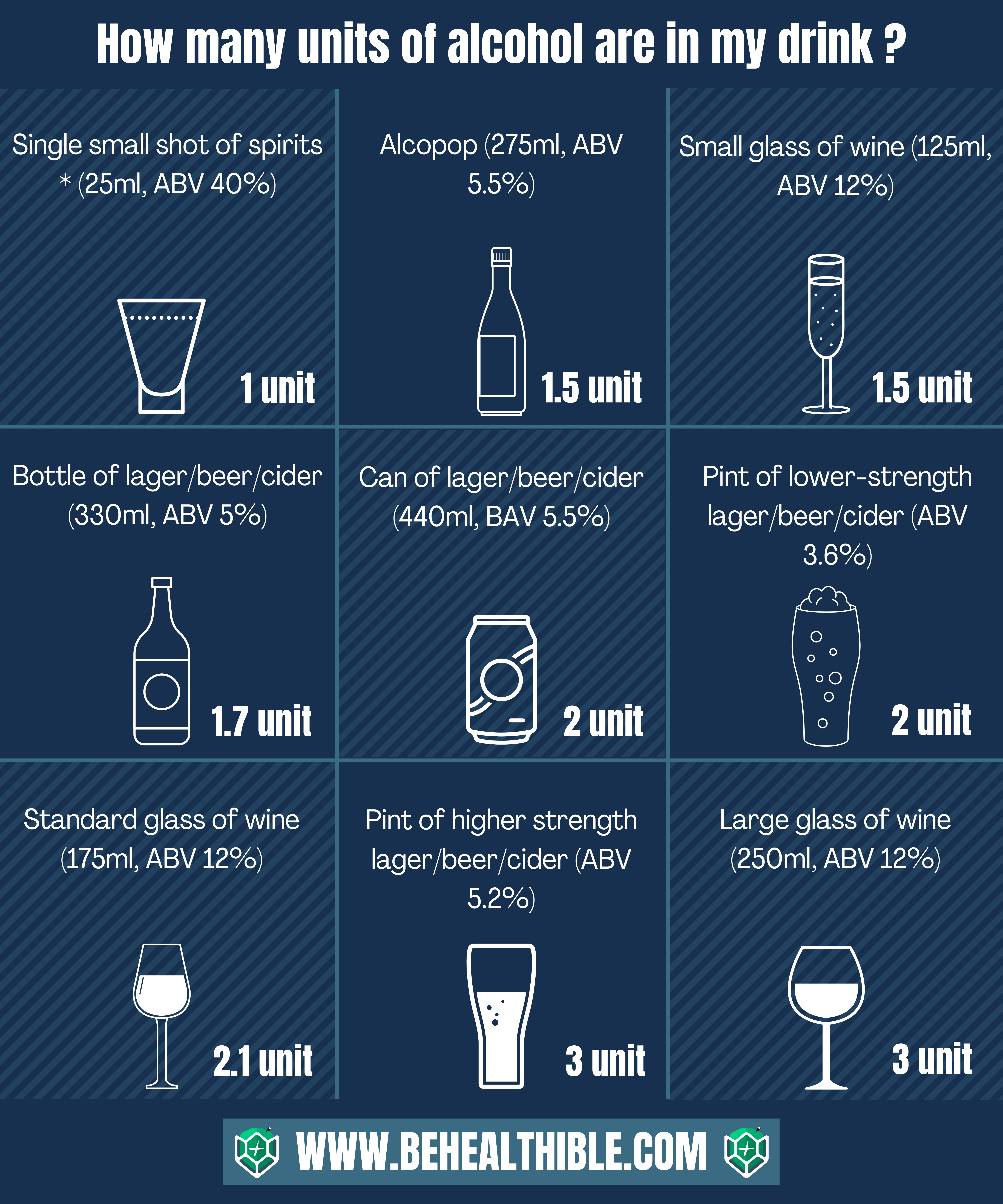 There are some great resources available online where you can plug in your alcoholic beverage of choice, and the amount you consume on a weekly basis, and you will be given a fairly accurate representation of what your weekly alcohol consumption looks like, with an example being https://alcoholchange.org.uk/alcohol-facts/interactive-tools/unit-calculator

Make sure you know the number of units of alcohol you are consuming, as this is vital to ensure you keep your alcohol consumption on a tether before it takes you for a ride.

Now that we understand a little about the origin story of alcohol, this time next week here at Beheathible we will delve into the risks associated with alcohol misuse, and force it to spill its contents.

See you then, and in the meantime feel free to share with others.